For the past 30 years, Southern rock jam band Widespread Panic has toured the country and played sold out shows to fans ranging from drug induced hippies to whiskey fueled rednecks. In the wake of their shows they leave good times, memories, and a trail of drug and alcohol related erectile dysfunction the likes of which the jam band scene has yet to see. Armed with this knowledge, Pfizer has decided to sponsor the band’s upcoming tour and will be passing out Viagra samples outside of every show in every city.

The drugs of choice for Spreadnecks are LSD, cocaine, and whiskey (followed closely by every other drug available). The latter two, when used together, create a formula for flaccidity. After the shows, female fans have noticed that their male counterparts have penises that look like they just got out of “chilly water”. Well no more disappointment ladies! Viagra is here to turn that little willy into a big wooly mammoth. Just make sure he is wearing a coat. 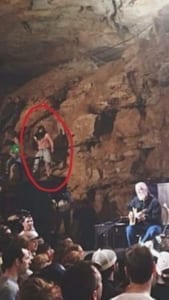 Longtime Panic fan and medicinal cocaine reform advocate Patrick Wilson, or as he’s known on lot “Snakes Get Weird” (pictured left in a cave), had this to say:

“Before I added Viagra to my showtime drug regimen, my dick was acting like a dyin’ man at an all time low, begging for mercy. I just wait ’til the medicine takes and these little blue Indians make me an action man again! These three hot chicks were ready to ride me high and I was ready to ride ’til the last of them fell!”

The market for the drug was tested at a Valentine’s Day show in Columbia, SC, where it went over swimmingly to say the least. A couple reportedly engaged in sexual intercourse during the show. In a post climax interview, the woman who wished to remain anonymous told Word Brothel, “He stayed up the whole time! When they encored with Bowlegged Woman we both had a laugh because that’s how I was walking after the show on my way to round two in the car!”

We sat down with band member Jimmy Herring and asked him what he thought of the new sponsorship. “Well, it’s great not just for the fans, but for the band too. We sure ain’t getting any younger and the pills help Little Jimmy get up when I feel like being a sex machine after the shows. Thank god the pusherman (Viagra) came to the party.”

As the band plans on slowing down on touring, this news is sure to make summer tour a blowout of epic proportions for the band and fans alike. Be on the lookout for some baby Panic fans crawling around come March and April 2017.