Rapper B.o.B Claims That Air Is Not Real

The Rapper known as B.o.B has been making waves on Twitter and upsetting the scientific community by claiming that he has proven that Earth, the planet he calls home, is not spherical, but in fact flat. This has started a back and forth with the nerd that’s made science cool again, Neil deGrasse Tyson, that culminated in a diss rap aimed at the Cosmos host. 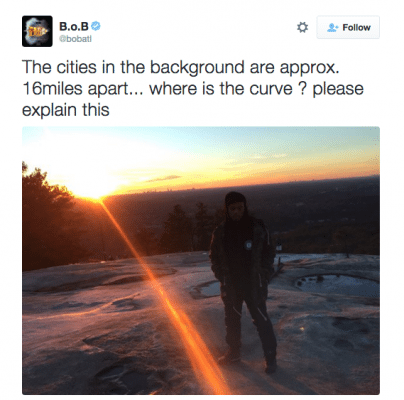 Now B.o.B is raising the stakes. Using his gift of keen observation, the wordsmith has brought to light another controversy in the scientific community. Air! He told the world via a YouTube video that is currently going viral, “What are we supposed to do? Sit here and believe the lies we’ve been told? If air is real, how come we can’t see it? You can’t touch air. It don’t smell. Come on, you can’t even taste it. That shit ain’t real. Ya’ll need to wake up.”

That’s right, he went there. What will NdT have to say to this? The astrophysicist has not been reached for comment, but we at Word Brothel are fairly sure he is checking his facts and brushing up on his research for a proper comeback that will take place in 140 characters or less: the manner in which all scientific debate should be conducted.

It may be that in this country we have reached pivotal point in history where we should stop giving such credence to people celebrities. We should stop putting so much stock into people who “make waves” on social media with their crazy theories. Maybe it’s time we stop listening to the crackpots like Neil deGrasse Tyson.

Five Beautiful LA Hikes That Will Literally Take Your Breath Away, Chubster

This Color Blind Man Is Racist Despite Condition

Decline In Playboy Subscriptions Suggests Men Have Been Lying