Fast food consumers have decreased their intake and started opting for healthier food on the go over the past decade. Thanks to a new study by food scientists at Columbia University, that number may drop even more. Their shocking new study shows that the average fast food customer swallows 100,000 fast food employee hairs every year; that’s an entire human head’s worth of hair!

Let’s break down the statistics here for our mathematically challenged readers. This is the average fast food eater. If you primarily cook at home or eat at sit down restaurants, this statistic won’t apply to you. However, if you’re one of the average fast food consumers (5-8 meals a week), then chances are you’re eating the same amount of hair it would take to make a wig. That’s about 100,000 hairs a year, or roughly 274 hairs a day. Next time you order a burger from Burger King, take a look before you stuff it in your facehole. Chances are you’ll notice a sizeable chunk of the fry cooks hairs in there. Have it your way, ask them to hold the hair!

For readers who are visual learners, we have included a graph from the U.S. Department of Food Science below. 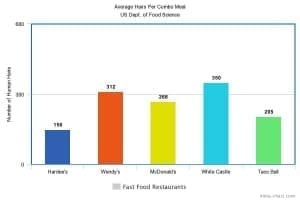 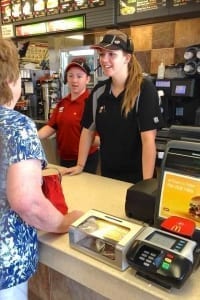 The numbers are startling for some, but if you’ve ever worked behind the counter this comes as no surprise. Angela Worther, or as McDonald’s patrons from the heart of Denver know her “The Drive-Thru Queen”, says that she would expect the number to be double that if they only ate at her location. “A lot of customers complain about the amount of hair in their food, but some can’t seem to get enough of it. They ask for extra golden strands with their Big Macs and they don’t mean our delicious french fries,” Angela reported.

As of now, the FDA has refused to step in and take action stating, “While human hair is unappealing to some people, there is no evidence that it is unsafe or preventable. Hairnets do not adequately eliminate the problem and, short of having all employees in the food industry shave their heads and bodies completely, there is no solution to this problem at this time.”