The People v. O.J. Simpson WAS a marvelous show.

It successfully walked the line between real life tragedy and melodramatic cable television fodder. You couldn’t talk about television LAST YEAR without hearing about the Emmy winner for Outstanding Limited Series in 2016.

Old news right? Wrong! Not for Linda Winkler, at least.

Winkler, a Netflix subscriber since 2013, was seen today at work, waxing poetic about the 2016 Golden Globes favorite as if it were a brand freaking new thing. Like a woman awoken from a cryogenic freeze, Linda remains in awe over the wonders of a world that has since passed. 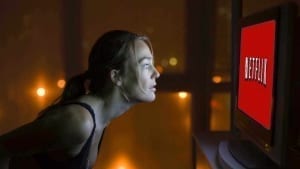 Her journey into 2016 began last night when Netflix recommended that she might enjoy The People v. O.J. Simpson based on her 5-star rating of the Emily Deschanel vehicle,  Bones. Winkler admitted, “I kinda remember the O.J. trial, so I was initially skeptical that this scripted television drama could be more exciting, but boy, talk about foot-in-mouth syndrome!” The year-old show that she began watching on a lark turned into a 4-hour binge session and a brand new obsession.

Now it’s ALL her friends hear about!

Since her date with fate, Linda has successfully pivoted every non-People v. O.J. Simpson conversation into full on People v. O.J. Simpson conversation as if it aired on the FX channel for the first fucking time. She broadsides her peers with questions like whether they believe John Travolta’s portrayal of Robert Shapiro was a convincing effort for the Saturday Night Fever star. Other fresh observations have covered a variety of topics from David Schwimmer breaking the shackles of his character Ross on “Friends” to analysis of the actual trial.

Shared enthusiasm has proven difficult to come across due to everyone having had the same goddamn conversations last year. This has yet to deter Linda, who is happy to see Cuba Gooding Jr. back on top and believes 2018 will be a big year for him.