CHICAGO, IL—For the proud citizens of Bachelor Nation, the arrival of the show’s new installment “Listen To Your Heart” is a mixed bag. The two hour series premiere was everything you would expect it to be: nauseatingly hopeful and way too long. Before getting into the recap it should be noted that this show was something that no one except last season’s Bachelorette “winner” Jedd Wyatt asked for. With a whole show dedicated to becoming famous and “making it” in the music industry, it’s hard to believe that all these people from Nashville actually are here for love and not just to become a “Public Figure”on Instagram. But let’s get on with the recap so you can understand the memes without having to watch the show.

The show opened in a comfortably familiar way, with our lord and savior Chris Harrison standing outside the mansion to welcome us to the most dramatic season of television ever. A show so dramatic it’s like every episode is the movie A Star Is Born, a parallel the show will mention and shove down our throats the entire episode. The first contestant arrives. Her name is Jamie and she is the ONLY girl that wore a formal dress. The first guy Ryan doesn’t seem to mind and is quickly smitten with the Eve to his Adam in this garden of forced story lines.

Their romance is short lived as Trevor, another beautiful singer/songwriter arrives and swiftly takes Jamie’s attention away. A lot more people came but it’s hard to remember all their names. The show was TWO HOURS so your brain can only take in so much fluff at a time. There was one notable moment on the show and its when this exhausting no name, we’ll call him douche boy Todd (edit* I went back to look up his name and it’s literally MICHAEL TODD, I’m not joking), came in way too hot, sang within the first five seconds and tried to kiss the first girl he talked to by saying, “You have nice lips. Do you like my lips?” At about the 45 minute mark I realized that watching this was too hard and I just didn’t want to subject myself any further, so to get the jist of the episode I’ve written the full synopsis of A Star Is Born below. Read that and it will pretty much be the whole series except the people are more desperate and more addicted to pills. 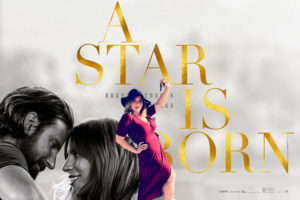 Jackson Maine is onstage, he is GOOD. He’s also hot in a dirty daddy kind of way. He’s playing his guitar like he’s the last of the real cowboys because he is. But what the audience and his team doesn’t know is that this city in Missouri is drunk on whiskey and high on pills. This will come back up later.

Cut to Ally (GAGA) in a bathroom. She’s breaking up with her boyfriend because who needs the drama and she gets back to work. Cause That’s. What. Women. Do. She works for a catering company and her boss is a total drag who cusses too much. Ally’s got to get out of there short and long term. She has a gig tonight and her co-worker/friend/storyline that will get cut later just wants to see her friend shine. Ally takes out the trash. She walks down an alley (coincidence?) while she sings. “Wow she’s talented,” you’ll think to yourself, “if only someone could see that.”

Cut to: Jackson looking for a drink (pattern forming here?) He passes a billboard with a bunch of nooses on it and honestly, who paid for that? He needs the drink even more now. He passes a bar and knows he can get a fix there. They stop. But wait, it’s a drag bar?! Love a good juxtaposition. Someone recognizes Jackson and brings him to the bar. He sticks out, but at least he can get a drink. The crowded bar gets excited and then everyone quiets in anticipation. Jackson’s new friend tells him the next girl is amazing and is the only performer who actually sings. It’s Ally. She sings La Vie En Rose and she does it in french so you know she studied abroad. She kills it.

Jackson wants to meet the amazing singer. He waits for her to take her makeup off and get the paint out of her hair. Jackson sings a song to Willam and Shangela from RuPaul’s Drag Race. Ally and Jackson leave and go to a bar together where some incel wants to get a selfie with the country star. He starts harassing them until Ally punches him in the face. She’s tough. Cut to them in a grocery store getting iced peas. Jackson is adamant that she ice it right away. The woman checking them out takes a picture of them without asking. Jackson and Ally sit in the parking lot. He ties the peas to Ally’s hand and probably talks about how beautiful she is. He draws his finger down her nose, establishing it as their “thing”. Ally sings the first part of Shallow and OMG she’s good and can write songs?! Jackson wants to bang her brains out and so do you.

Jackson drops her off and they have a moment about her nose again. He leaves. Ally gets home and although she wants to sleep from a long night of being musical and horny she has to launch into taking care of her dad and his friends who I think work/run a limo company. Later, Jackson sends a driver to bring her to a plane to bring her to a concert, but ugh she has to work. She’s gotta make that money so she goes to work but, um, excuse me? Her boss curses at her and she has had enough! She quits and her friend takes off with her but he says he’ll be back because he’s a secondary character who can’t afford to not make rent.

They go to the concert and as they stand on the side of the stage enjoying the view, Jackson sees them and switches gear saying they’re gonna sing a song that his friend wrote and invites Ally onstage. Oh I forgot that earlier Jackson was freaking out because he wanted Ally to be there but his manager/brother/perfect accent/perfect mustache is worried about his hearing and him not wearing his ear pieces. What a reckless cowboy. Okay back to the concert. They sing Shallow. Look it up, it’s good. And wow a star is born guys. Ally is shy but once she sings she’s like not shy? Jackson gets drunk and passes out after the show. His brother talks to Ally. Okay some more stuff happens but basically Ally quits her life and joins the band.

Montage of them just being country. They’re in love and there’s music and the music makes them love and their love makes the music. They sing a song about wanting the other to remember them like how they are together in that moment in time and that’s called foreshadowing people! They seem happy. But Ally, she’s too big for the country stage. She gets scouted by this music producer and that’s when things get out of control.

Ally starts going away from country music and performs a pop song at the IHeart Radio(Music?) concert. She gets a Grammy nomination, which obviously sting’s Jackson’s male ego because he belittles her music in a jealous temper tantrum. Jackson spirals out, finishing the spin with extravagance as he pisses himself and passes out during her acceptance speech. Men are so dramatic.

Cut to everyone trying to wake Jackson in the shower, Ally is sobbing and her dad is yelling cause again men can’t handle a moment. Jackson needs help, so he and Ally take some time at their house with the neon La Vie En Rose sign (callback), they get a dog, they seem good. Ally tells Jackson that after her concert that night she’s gonna cut the rest of her tour so they can be together which is a lie (which is a sin), but sometimes in relationships you have to be bad to be good.

Ally’s producer/manager takes Jackson aside and tells him he’s holding Ally back and she’s going on the tour and blah blah blah basically he’s a little prick boy and his words are poison. That night while Ally is living her best life on a flying piano and giving shout outs to Jackson who she thinks is there. Jackson is still at the house and after breaking his sobriety and taking off his cowboy hat for the last time, Jackson goes to the garage and hangs himself. Which, if you remember, brings back that noose billboard from before and ties up that loose end.

Ally grieves the loss of her love and light and, honestly fam, it’s really sad. Jackson’s brother consoles her with the most beautiful speech which did make me cry. He says, “Music is essentially any note between twelve octaves. Twelve notes and the octave repeats. It’s the same story told over and over. All that the artist can offer the world is how they see those twelve notes. That’s it. …”

It’s haunting. Ally is sad, but she knows how to honor Jackson the way he would want. During his memorial she sings the song he was working on. Oh yeah, I forgot at some point in between Ally getting famous and Jackson dying he was working on a song and he sang it for Ally and it made you think everything was going to work out for them so it gave you a lot of false hope. Anyway, so Ally sang that song at Jackson’s memorial and the movie ends with them back at the piano together and you’re just like, “Damn. That’s a good movie, but I guess you have to kill the old version of yourself to be famous.” And that’s the plotline of A Star Is Born, which after adding a shit ton of water to is the plotline of Listen To Your Heart.