CHICAGO—Parents whose teens are attending Lollapalooza this weekend know a thing or two about keeping it real, but at least one local mom forgot to take her chill pill before letting her son attend the music fest. Despite the reassuring notion that hospitals are preparing for an influx of badass kids who have out-awesomed themselves this year, Lauren Wilkinson can’t stop being a stick in the mud after receiving at text update from her son, which stated that he was “on LSD”. Lauren felt at ease for a moment, assuming that her baby boy was heading home on Lake Shore Drive, but like an acid flashback, she suddenly remembered that LSD is also the name of a popular hallucinogenic drug. That’s when the panic kicked in. 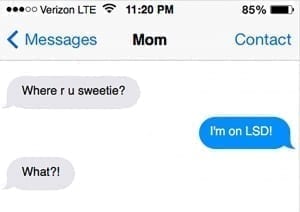 Sure, the text could mean that her son is in a Lyft, safely returning to mommy after a night of responsibly attending a good clean mediocre snooze fest, but this is Lollapalooza and Lauren’s son has never been known for being a mainstream milquetoast, making the message incredibly hard to decipher. Attempting to kill her son’s buzz and most assuredly ruin the multigasmic experience of seeing Arcade Fire in a park full of his peers passing out around him from a mix of summer heat and MDMA, Mrs. Wilkinson fired off several text messages that embarrassingly requested any indication that her son is “okay” and “alive”.

About an hour after his initial text message, Lauren’s son finally responded to the slew of eye-roll-inducing pleas to reply. Graciously, he made sure to tell her, “Had to exit Lyft cuz we on E. Jim takin a pee after 2 much coke. Gonna pck [sic] up molly and crystal after.” The update did nothing to mellow Mrs. Wilkinson.

Song Of Myself: Local Man Self Sucks In Self Driving Car While De La Soul’s ‘Me Myself And I’ Plays Over Jim Carrey’s ‘Me, Myself & Irene’

16,000-Year-Old Cave Painting Believed To Be First-Ever ‘You Might Be A Redneck’ Joke