GTA 5: A Utopian Society Where Nobody Questions Second Amendment Until You Point Your Gun At Them And Start Mass Shooting People 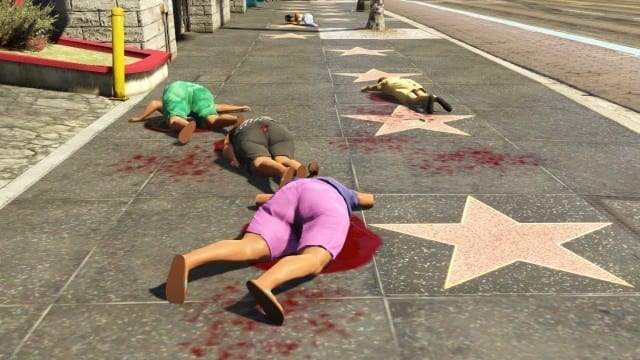 By: Maximilian Stolte
Leave it to the creative minds at Rockstar Games to perfectly encapsulate what a truly free society looks like. Not bogged down by liberal agenda and restrictions of liberty (hence where the fictional Liberty City derives its name), this game grants players a glimpse into what a utopian society looks like: a society where you can walk around wielding military-grade weaponry and nobody bats an eye until you start shooting people en masse.
The sensation players feel when utilizing the second amendment right is exhilarating and no doubt what keeps millions playing again and again. Although only virtual, the joy that one feels carrying a compact grenade launcher on a city street packed with civilians is as close to nirvana as most patriotic Americans will experience in their lifetime. This is what a utopian society looks like people!
Some naysayers will retort, “But what about the bad people with guns?” These traitors to the American way have obviously never played the game. All that matters is YOU, the person with the controller. This is a world where everyone besides you is constrained to an algorithm that doesn’t allow them to go on killing sprees or cause harm to others unprovoked. Only you can do that and you’re a god-fearing American, so why would you abuse that power?
For the sake of argument, let’s say you did decide to open fire on unsuspecting crowds of people. What would happen? Well, you’d be chased down by the police (you’re welcome cop haters!) and arrested or murdered in the streets like the criminal you are. Then your character respawns at a hospital or jailhouse and everybody goes about their day as if nothing happened. No pushes for tyrannical gun laws or leftist rallies against the constitutional rights given to us by our founding fathers and God himself. Everyone just accepts that events like the one that you perpetrated are the cost of living in a free society.