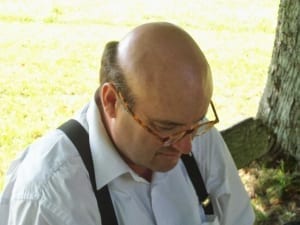 JACKSON, MS–When Bill Haverford’s male pattern baldness began, he tried everything to prevent it: hair treatments, special shampoos, vitamin supplements, you name it. Nothing seemed to work to restore his hair to its full, youthful appearance and he plummeted into clinical depression. That all changed when his son, Alec, bravely shaved his head in solidarity with his father.

Alec’s kindness is truly a win for compassion, an act that restores one’s faith in humanity. This child risked ridicule from his peers just to make his father feel better about himself. Alec said about his bullies at school, “Well they always picked on me anyways for having a bald dad, so I figured it wouldn’t matter much and might make my dad want to go to work again without his stupid hat.”

Beyond just the torment of students at school, Alec’s head is now also a target of skin cancer from the sun. He applies SPF 100 sunscreen to the tops of his head every morning. He said that he learned the necessity for this regimen when his dad first started balding and “was too proud to put it on his head and it got sunburned”. His father now proudly joins him every morning in this process since he has thrown out his hat and embraced his baldness.

This father and son’s story just goes to show how we can inspire each other in the most unexpected ways. If the world were filled with little Alecs, it would be a much better place. Anyone can shave their head if it’s under the guise that they hate cancer, everyone hates cancer. This child stepped up to the plate and stood up against a plight that will plague most of us: male pattern baldness.