A central Illinois 5th grader has just broken up with a girl he never met this week on social media. Word Brothel reporters were able to catch up with Jerid Daring in his hometown of Chillicothe, IL to see what caused this irrational decision.

Daring has been the focus of a lot of attention in his small town after dating the hottest girl in his class, as well as the class above him in a span of just one month. When asked if he will also pursue the hottest girl in the grade below him, Mr. Daring replied, “No duh. It just depends on who the hottest girl is this week.” It appears young Daring has been able to apply the momentum of contrived confidence from arbitrary circumstances like only young people can: in this case, a cool last name. His latest flavor of the week was an older catch, what some would call a real knockout. When asked what caused the relationship to fail, Daring simply said, “She’s not that hot and I have a ton of new matches. Plus she lives twelve miles away, it’s not like I’m ever gonna see her.” 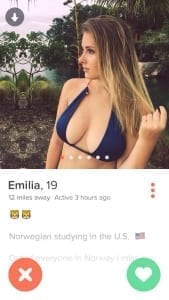 With the suave grace that only a 5th grade boy still learning social skills is capable of, Jerid ended the relationship the same way he started it: via text message. This way, he explained, he could spare her the embarrassment of having their first face to face meeting also being their last. “I just can’t stand to break their hearts in person. I may have a tough badass exterior, but inside I’m sensitive too,” explained Jerid, who was also quoting his Tinder bio. Emilia (pictured left) was unable to be reached for comment.*

When pressed for details about the relationship and his future romantic plans, Mr. Daring would only repeat, “Frig off,” in various voices. He then made fun of the Word Brothel junior reporter’s glasses and outfit until he left.

*(Editor’s Note) Word Brothel fact checkers tried to locate Mr. Daring’s ex-girlfriend for comment, but were unable as no one knew her last name.