2016: The Year Memes Picked The President

This year’s presidential election is shaping up to be one for the record books. As if the candidates alone weren’t unique and zany enough, the source of information about them has undergone a transformation as well. Memes are quickly coming to the forefront of political discourse. Those candidates whose supporters make the dankest memes will undoubtedly win the nomination.

Donald Trump, the hairpiece that achieved sentience and now controls an orange billionaire’s body, currently has the poorest quality memes being produced. However, his voters have out-memed the rest of the GOP, making him the frontrunner at this time. 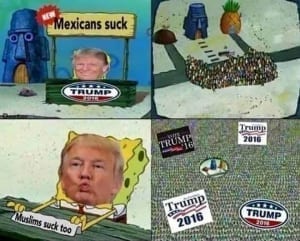 Coming in at the dankest of top notch memes is none other than Bernie Sanders. While Bernie was too old a fogey to know what a meme was before 2014, he has become the subject of a widely used meme trope (see below).

It stands to reason that memes have become a free campaigning tool that reflects the actual support from citizens rather than the support from corporate contributors, as paid advertisements do. 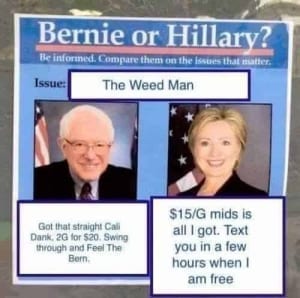 Hillary Clinton, the female candidate, who was in an open relationship with a former president unbeknownst to her for a large span of the 90s, and her followers attempted to strike back. They accused the memes of being sexist, because she clearly must have poor taste due to her gender and not because she’s a robot programmed to lie and switch political positions every 5 years.

As the arena of political debate reaches its highest echelon, wordy pictures on the lighty screens, we are sure to see a presidential candidate nominated by witty millennials with photoshop apps. While DNC chair Debbie Wasserman Schultz may believe she has shut down Bernie Sanders and his followers, his squad of dank memers have a different agenda: making pointless pictographs for the Internet while the morally corrupt system selects the puppet that best serves their monetary interests. 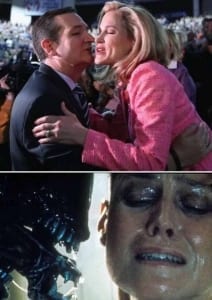 16,000-Year-Old Cave Painting Believed To Be First-Ever ‘You Might Be A Redneck’ Joke