Mark Twain’s classic novel, The Adventures of Huckleberry Finn, is an important book in American history that challenged racism and the institution of slavery in the south. Unfortunately, the writer was quite the potty mouth and used the terminology for his time that is a big no-no today. That’s right, we’re talking about the “N” word.

In Philadelphia this past December there was controversy surrounding the book once again. A school district banned the book from its curriculum and there was a big backlash from those who opposed the censorship.

Now, in efforts to appease the politically correct agenda as well as those that value education, a progressive school district in New Jersey has decided to replace the word with something a little less archaic: “black guy”. The beloved character Jim will now be known as “Black Guy Jim” instead of that nasty old name they used to call him. He will also speak in a dialect that isn’t seen as uneducated and racist.

For example. The line “Who dah?” by Jim has been replaced with “Whoever is there? You’ve interrupted me while I was reading Chaucer” (pictured below). This adds depth to the minority character and doesn’t detract from the historic value of the work in the slightest.

The school board has also made changes to the history curriculum stating that teaching about slavery in America is fine as long as they focused more on the fact that slaves were called a derogatory word rather than the fact that they were violently beaten and murdered. 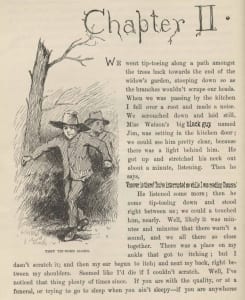 With Site Down, Facebook Users Resort To Yelling At Neighbors About Meaningless Bullshit