NEW YORK, NY—This week, Subaru CEO Tomomi Nakamura announced what he described as “a revolutionary and progressive new addition” to the Subaru Forester. Coloradans from Boulder to Fort Collins can rejoice in saving the time and money buying and sticking on bumper stickers that could be better spent buying some sticky icky and smoking said marijuana. For the foreseeable future, all Subaru Foresters will come with factory installed “coexist” bumper stickers.

“You drive a Subaru because you like the outdoors and you’re just environmentally and socially conscious as hell. It’s almost redundant even putting the bumper sticker on it, but we all do it,” Denver resident Daniel Pylman said about the new model. “I’ve been driving my Suby up the mountain to shred fresh pow for three years now and my bumper sticker has the wear to show for it.”

In addition to stickers that read “coexist” with religious iconography from around the world, Subaru will also offer “equality” stickers plastered to their vehicles before they leave the plant. The car company that cares is ready to show it. More-so, they’re ready for you to show people that you care from the moment you drive off the lot. Whether it’s the fact that all religions and people aren’t so different and we should all get along or marriage equality for LGBTQ couples, drivers will know that much more about Subaru owners, besides of course that they have great taste. 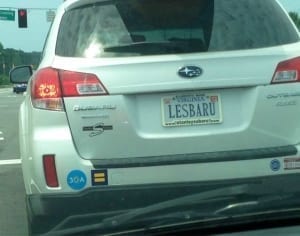 Subaru. Buy a Subaru. You’d really like to own a Subaru. Subaru. It’s a great automobile.

Nakamura has made the company’s political stance very public in his remarks regarding the decision: “Bumper stickers are good, except when they’re bad. I think the bumper stickers that I think are good are good, but if it was, say, a Trump bumper sticker, then that would not be good. I think everyone at Subaru agrees on that much.”

Stockholders in Subaru have been unsure whether or not the statements would matter since nobody who voted for Trump would “be caught dead in one of those shrimp dick puss-mobiles” as one man in a Ford truck said at a gas station pump next to reporters.