Researchers at Duke University have published a paper that uncovers a shocking truth about professional bowling’s most elite competitors: that when rolling the ball down the lane they are, with frightening regularity, still managing to miss some of the pins. That’s right – despite spending large quantities of time practicing a sport enjoyed- and often excelled at- by people of all ages, there are multiple times per game that these players are not knocking over all 10 of the pins on the first try.

The report is sure to revolutionize the way the sport is viewed by the public. “I was shocked when I saw the results of our distributions,” said Danny Fulton, one of the university students involved in the project, “I just assumed that if these people were professionals they would be able to get a strike every time. I mean, I went bowling with a couple of my friends last week and was able to get 3 strikes in one game. And I haven’t bowled in like a year and a half! It’s not hard!”

Researchers initially assumed that there was some sort of mistake in the parameters of the games that were studied, however they were again surprised to find that these adults who called themselves professionals were playing on the same regulation-sized lanes found at most local bowling alleys, the same alleys which regularly host parties for children whose motor functions aren’t fully matured. 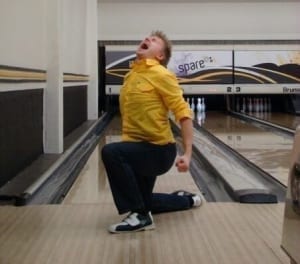 The study goes on to reveal many of these players even used their own custom-made balls and shoes to play. Dr. Albert Schumacher, who led the graduate-level research project, was particularly appalled by this fact: “Honestly I have to waddle around in shoes a-size-and-a-half too big for me, and use a janky 8-pound ball. But even so I can pretty much get 7-8 pins minimum on every first bowl. I don’t even have a strategy, I just throw it as hard as I can at the front pin and it pretty much works out every time.”

Not only had these “best-of-the-best” players not perfected one of the few sports where a perfect score is actually possible, but perhaps most shocking of the University’s findings was that in many cases they were still being paid to play it. Some of the bowlers that were researched even called Pro Bowling their primary career, and were able to sustain a stable quality of life for their entire family off of their embarrassing failure to master a leisure sport that is literally the same every time you play it. With any luck, the work done by these brave researchers will change that.