State Of The Union Drinking Game Results In Hundreds Dead 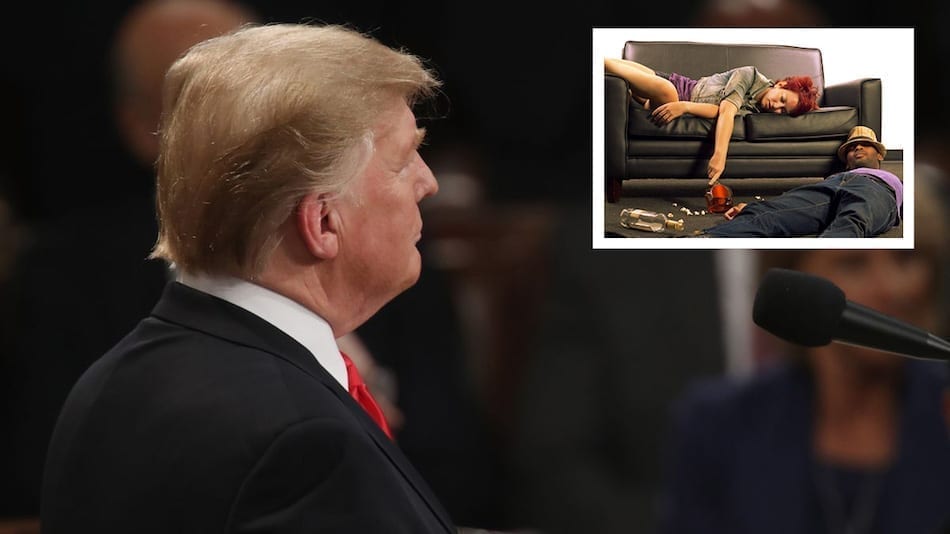 WASHINGTON, DC—During the President’s State Of The Union address, millions of Americans gathered for the annual SOTU drinking game, where participants take a shot every time the president takes credit for someone else’s accomplishment, doubles down on a ridiculous campaign promise, attempts to shift blame, or engages in a number of predicted behavioral patterns – anyone of which was guaranteed to get anyone playing positively schnacklered. This year, however, a Chicago resident named Clarb Blorfgrin decided to add a new rule: take a shot every time someone in attendance looks like they’re “over it.” Within 20 minutes of the president’s opening remarks, participants in the game began dropping like flies as their cells became saturated with every kind of alcohol known to humanity.

“It was madness,” states Maine resident & SOTU game survivor, Martha Wince. “It started simple enough. Nancy Pelosi clapping as Trump steamrolled her introduction gave is a good buzz. But as soon as he started talking about policy, and the camera started cutting to the absolutely over it Democrats, it quickly became a shitshow. Someone suggested that we simply drink less frequently, but that simply couldn’t be done, for those aren’t the rules.” Martha sat in muted horror as another in her friend group, Dave, sat by a toilet vomiting for hours, only stopping to say, “Legislation Investigation” over and over again. Reports said that 15 minutes into the broadcast, his BAC was 3. Not .03, or 0.3, but 3.

“All we wanted to do was make something fun out of our political situation,” said Angela Spaniel, age 23. “I wanted to cheer on AOC and the rest of the women newly elected to Congress. The Trump took credit for it, and the game went on. Now the doctor tells me that the cirrhosis in my liver is so bad that another drop of alcohol could literally kill me.” It breaks the heart to see such a thing, especially considering the years of political-based drinking games she’ll no longer be able to enjoy.

Even the owners of local bars are feeling the melancholy. Blade Zeggles, owner of the Rusty Doogler in Baltimore posted record sales, but couldn’t find a smile. “We made $478,000 in one hour, but at what cost? There’s a lake of urine in the alley so deep I need a canoe to take out the trash. One of my patrons died with a shot glass in his hand. It took eight paramedics to get him to let go. It was a massacre. An absolute massacre.”

The strong female presence at the SOTU gave us a lot of hope for the future, but all we can do about the present is hope that the current generation can learn to hold their booze better. These games are likely going to get worse before they get better. Bottom’s up, America.